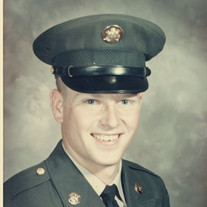 US Army SFC (Ret) Terry M. Seeba, 71, passed away peacefully surrounded by family and friends at home in Harlem, Georgia on May 16, 2021. Terry was a highly decorated veteran who served in the Vietnam War, was awarded The Purple Heart, Defense Service Medal, Vietnam Service Medal, Vietnam Campaign, Expert Rifle and many other additional medals and awards. He went on to serve 20 years of Active Duty service in the United States Army as a Construction Engineer. After serving in Vietnam, Terry spent time abroad in many other countries to include the Philippines, Korea, Panama Canal Zone, Saudi Arabia, and Germany to name a few. After retiring from the United States Army Terry went on to work for the United States Postal Service in Harlem, Georgia until his retirement. Terry was a devoted husband, loving father, an accomplished engineer, and a brave and honorable soldier. Terry was also an avid outdoorsman, who loved to hunt and fish. Terry is survived by his wife, Sarah Seeba of Harlem; three children, Robert Evans (Rhonda) of Evans, Sheila Ortiz (Pete) of Grovetown and LaWanna Zummach-Powers (Wade) of Columbia South Carolina; his brother Dennis Seeba (Carla) and two sisters Patty and Susan Seeba all of Lincoln Nebraska; Grandchildren Shae, Nikki, Matt, Chandler, Summer, Sable, Selena, Liza, Lainey, Terri, and many great grandchildren. Terry is preceded in death by his parents, US Air Force SMSgt (Ret) Donald and Betty Seeba of Cook, Nebraska and his grandson USMC Cpl Cody Ortiz of Grovetown. The family welcomes any and all stories, photos, and memories that Terry's friends would like to offer. Funeral Services will on Wednesday, May 19, 2021 11:00 AM at Old Union Baptist Church with the Rev. Chris Wasson officiating. Burial will follow in the church cemetery with Military Honors. Visitation will be held on Tuesday evening from 6:00 PM until 8:00 PM at Starling Funeral Home, Harlem, Ga.

US Army SFC (Ret) Terry M. Seeba, 71, passed away peacefully surrounded by family and friends at home in Harlem, Georgia on May 16, 2021. Terry was a highly decorated veteran who served in the Vietnam War, was awarded The Purple Heart, Defense... View Obituary & Service Information

The family of Terry M. Seeba created this Life Tributes page to make it easy to share your memories.

Send flowers to the Seeba family.