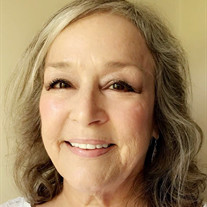 Harlem, GA - Ms. Sherri DeWitt Polatty-McDaniel, 66, of Harlem died on Friday, May 8, 2020 at home with her daughter after a battle with stage IV lung cancer. She is preceded in death by her mother, Mrs. Mary Ruth Smith Polatty, maternal grandmother, Mrs. Ruth Emerson Dunaway Smith, who was like a second mother to Sherri, both of Harlem, Georgia; father, Calvin Mills Polatty, Evans, Georgia, paternal grandparents, Ernest and Lilly Polatty. Sherri is survived by her daughter and devoted caregiver, April Elizabeth McDaniel and Aniston, Sophie, and John Henry - her sweet, furry family members. She is also survived by her son, Robert Edward McDaniel (Jessica). Sherri was born in Augusta, Georgia; spent her first four years in Evans, Georgia before relocating to Harlem, Georgia where she lived the majority of her life. She was a member of Harlem United Methodist Church as were her mother, maternal grandmother, and maternal great grandmother, Mrs. Mary (Dozie) Rebecca Greene Dunaway and maternal great grandfather, Mr. Henry Marshall Dunaway. Sherri graduated in 1971 from Harlem High School, and attended Georgia College at Milledgeville where she graduated with an Associate Degree in Nursing. After graduation, she worked at Eugene Talmadge Memorial Hospital (MCG), Augusta VA, Downtown Division and Augusta State Medical Prison, respectively. She retired from ASMP in 2015. Upon retirement, Sherri joined the Pioneer Garden Club in Harlem. She truly enjoyed her membership. She used a good portion of what she learned with one of her favorite hobbies - working in her yard. Sherri also loved "old movies" on TV with such stars as Buster Keaton, Bette Davis, William Powell, Jeanette MacDonald and Nelson Eddy to name a few. She also was a fan of Agatha Christie and Sir Arthur Conan Doyle. A private graveside service will be Monday, May 11, 2020 in the Harlem Memorial Cemetery with Rev. Larry B. Sims, Jr. officiating. Pallbearers will be Mr. John McCord and Mr. Joe Jolley. In lieu of flowers, memorial contributions may be made to: Harlem United Methodist Church or an animal rescue of your choice.

Harlem, GA - Ms. Sherri DeWitt Polatty-McDaniel, 66, of Harlem died on Friday, May 8, 2020 at home with her daughter after a battle with stage IV lung cancer. She is preceded in death by her mother, Mrs. Mary Ruth Smith Polatty, maternal grandmother,... View Obituary & Service Information

The family of Sherri Polatty-McDaniel created this Life Tributes page to make it easy to share your memories.

Send flowers to the Polatty-McDaniel family.