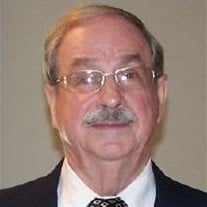 Appling, GA - Reverend Ronnie Martin Wheeless, loving husband and father, born December 20, 1939 in Thomaston, GA to the late Reverend Grady Wheeless and Sarah B. Wheeless. He went home to see his Lord and Savior face to face on November 10, 2019, even though he had already met Jesus and walked with him for almost 49 years through his service and commitment to the Lord. His home-going is both celebrated and mourned by his wife, Betty Perdue Wheeless, of 57 years, who he commonly referred as his "Special Angel". He was preceded in death by his brother, Gene Wheeless. Those still on this earth include, his two children, Tyler L. Wheeless and Trevon L. Wheeless (Cynthia); his two sisters, Marlene "Mollie" Pearson and Emmie "Totsy" McDaniel; his sister-in-law Anne Wheeless. Also, his four grandchildren are August Hubert (Andy), Zachary (Amanda Tranum) Wheeless, Chase Wheeless, and Shane Wheeless; and one great-grandson, A.J. Hubert. He was a veteran of the U.S. Air Force and was an expert marksman with pistol and rifle and served on the Airforce Pistol Team. Reverend Wheeless studied at Mercer and Emory University receiving his Master of Divinity. Additional education was obtained from Florida State University, University of Maryland, and Gordon Military College. He studied the areas of history of science, philosophy, and in particular an in-depth study on the War of Northern Aggression and Enslavement of the South. His first job was at the Thomaston Mills as an office clerk. They moved to Atlanta, GA where he worked on the staff of Georgia Tech as a Senior Accountant. After moving to Pennsylvania, he served as the Professor of the New Testament at the Manhattan School of Theology in Altoona. Throughout his lifetime, Reverend Wheeless pastored multiple churches in the areas of Savannah and Rutledge, Ga and Pennsylvania. Reverend Wheeless ended his service as a pastor at Silver Run Baptist Church in Harlem, GA. He was stated as being the "Best Pastor" and had a Shepherd's heart. Reverend Wheeless' family will receive family and friends an hour before the service at Silver Run Baptist Church in Harlem, GA at 2 pm on November 12, 2019. The service will follow at 3 pm with Brigadier General, Steven E. Blanton of Rutledge, GA and Dr. Roland Galloway (current pastor of Silver Run Baptist Church) officiating. Reverend Wheeless will also have a visitation and graveside service in Thomaston, GA. The visitation will be on November 13, 2019 from 5 to 7 pm at Fletcher Day Funeral Home. The graveside service will be held at Antioch United Methodist Church Cemetery with Military Honors accorded on November 14, 2019 at 2 pm. Visit www.starlingfuneralhome.com to sign online guestbook. STARLING FUNERAL HOME, HARLEM, GA. 706-556-6524

The family of Rev. Ronnie M. Wheeless created this Life Tributes page to make it easy to share your memories.

Send flowers to the Wheeless family.