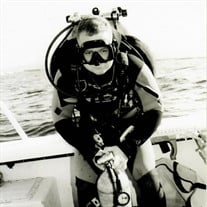 Robert “Bob” T. Bennett Jr, 53, of Dearing, Georgia passed away peacefully in his sleep Friday, February 5, 2021. Second to his family, Bob was passionate about scuba diving and had a long history of teaching student divers. He holds fond memories with his students, colleagues, and other instructors as a mentor, guide, and friend. Bob was always willing to accept a challenge as new technical forms of diving came his way, whether the early use of enriched air or other technical forms of diving. Bob was an avid closed-circuit rebreather and cave diver and always pushed the limits with his training and experience - diving across the world in places such as Honduras, the Florida Keys, and Bikini Atoll in the central Pacific. Through his passion for diving – and with the help and support of his family – Bob was able to achieve his lifelong goal of opening his own dive store. As owners of Bubbles or Not, Bob and his wife, Rose, were able to use their business to expand their dedication to the scuba diving community as well as introduce the enjoyment of diving to new divers. Bob joined the United States Army in 1985 and retired after 20 honorable years of service in the Military Intelligence Corps. Following his military retirement, Bob continued his work in the Intelligence Community as a civilian for the Department of Defense, devoting over 15 additional years of federal service to the National Security Agency and the Office of Naval Intelligence. He was a dedicated Intelligence Professional who loved his job and prided himself on providing the best support possible to both the Intelligence Community and warfighters abroad. No matter when or where you met up with Bob, you would always find him with the signature large cup of Diet Coke or iced tea, no lemon with Sweet & Low and his big Oakley sunglasses. Above all the experiences, the most important part of Bob’s life was his family. He was known as an amazing family man, committed to his wife, sons, and grandchildren. Bob is survived by his loving wife of over thirty-three years, Rose Bennett; his mother, Maria McNary; his father, Bob Bennett Sr; two sons, Rob Bennett (Alexis McEntire) and Lance (Rocio) Bennett, and his five precious grandchildren, Oliver Bennett, Grayson Bennett, Sterling McEntire, Isla Bennett and Baby Bennett due in July. Memorial services will be held at 2 PM, Tuesday, February 9, 2021 at Starling Funeral Home. The family will receive guests from 1 -2 PM at the funeral home prior to the service.

Robert &#8220;Bob&#8221; T. Bennett Jr, 53, of Dearing, Georgia passed away peacefully in his sleep Friday, February 5, 2021. Second to his family, Bob was passionate about scuba diving and had a long history of teaching student divers. He... View Obituary & Service Information

The family of Robert "Bob" Bennett created this Life Tributes page to make it easy to share your memories.

Send flowers to the Bennett family.