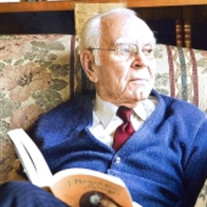 Dr. Raymond A. Cook, 99, of Valdosta, died on Saturday, June 29, 2019 at his residence. Son of the late Luther F. and Annie Stone Cook, he was born in Thomson, GA on July 19, 1919. He grew up and attended the public schools in Harlem, GA. He attended Young Harris College and received the AA and MA degrees in English from the University of Georgia and the Ph.D. from Emory University in 1953, the first person to earn a doctorate in English from that institution. He did additional graduate work at Duke University and the University of North Carolina. Dr. Cook taught in several public schools until World War II when he served as an officer in the Naval Air Service. In 1945 he married Mary Margaret Wilson of Savannah who died in 1994. Over the years he was a professor of English at Emory University, the University of Florida, Georgia State University, and in the early 1960's he was appointed as Fulbright Lecturer in American Literature at the University of Shiraz in Iran. In 1962 he was American Coordinator for "Operation Rovan," a world-wide project for rebuilding the town of Rovan in Iran, destroyed in the great earthquake in which 20,000 people died. In 1964 he became president of Young Harris College, the Methodist College in North Georgia, from which he later resigned to become the chairman of the English Department and the Division of Humanities at Valdosta State University. He retired as Professor Emeritus of English from VSU in 1984. In 1995 Dr. Cook married Dr. Elisabeth Mays Cook of West Palm Beach, Florida. They were married for 20 years prior to her death in 2015. Dr. Cook belonged to several literary and scientific societies and was the author of numerous articles on such literary figures as John Donne, Robert Frost, Walt Whitman, Geoffrey Chaucer, and Jane Austen; and other articles treating the relationship of science and literature. He was also the author of five books, including the biography of Byron Herbert Reece, the Georgia Poet. His long-time hobbies included writing, amateur radio, and the restoration of antique automobiles. Dr. Cook was an active member of First United Methodist Church and served in various capacities over the years, including Sunday School teacher for forty-plus years. He was a wonderful husband, father, and grandfather and will be greatly missed. Dr. Cook is survived by his daughter Katrina Allison and her husband Steve Cole of North Arlington, NJ; his stepdaughter Dr. Melinda Stein; his stepson Dana Stein, and his wife Margaret, all of Baltimore MD. Also surviving are 5 grandchildren, 3 great grandchildren and several nephews and a niece. A Graveside Service for Dr. Cook will be held at 11 a.m. on Thursday August 15, 2019 in the Harlem Memorial Cemetery, 310 South Bell Street, Harlem, Georgia 30814. Flowers will be accepted or donations may be made to the American Heart Association.

The family of Dr. Raymond A. Cook created this Life Tributes page to make it easy to share your memories.

Send flowers to the Cook family.