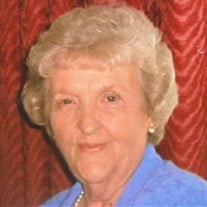 Margie Elizabeth Briscoe Bennett, 95, wife of the late Robert Freeman Bennett, entered into rest on Wednesday, November 21, 2018, at her residence. Funeral Services will be held at 2:00 PM on Saturday, November 24, 2018, at Harlem United Methodist Church with the Reverends Roger Vest and David Cooper officiating. Entombment will follow in Bellevue Memorial Gardens Mausoleum. Mrs. Bennett was born in Walton County to the late Ralph and Rachel Briscoe. In 1944, she received her Bachelor of Science in Home Economics from The University of Georgia. She retired from The University of Georgia Extension Service as a County Agent for Columbia County where she served as the first female director in Georgia. She also served as the Second Vice President of the National Association of County Agricultural Agents. As past President of Harlem Woman’s Club, she chaired the STAR Student program for many years, and was honored as Harlem’s Citizen of the Year. In her honor, the Margie Bennett Scholarship was established by the Harlem Woman’s Club to benefit the STAR Student of Columbia County yearly. She was a founding Member of Harlem United Methodist Preschool and was the Harlem UMC past treasurer and lay leader. As a member of the United Methodist Women, she had served as president and held Augusta district and North Georgia Conference offices. She was the recipient of the Doris Paul Award and was also a member of the Pioneer Garden Club. Survivors include her daughter Mary Bennett Campbell(John); one granddaughter, Amy Campbell Epps (Brian); two great-grandchildren, Eliza and Jackson; one sister, Dr. Carolyn Briscoe; one brother, Dr. Donald Briscoe(Wanda); sister-in-law, Betty Guest; two nephews, Don Briscoe(Sandy) and David Briscoe(Jeanann); and one niece, Janice Garrett (Mike) In lieu of flowers, contributions may be made to the Harlem Woman’s Club, Margie Bennett Scholarship Fund or to the Harlem United Methodist Preschool, PO Box 39, Harlem, GA 30814. Pallbearers will be Don Briscoe, David Briscoe, Mike Garrett, Daniel Garrett, Matthew Briscoe and David Roberts. Honorary pallbearers will be Harlem United Methodist Women, Tuesday Morning Bible Study. The family will receive friends on Friday, November 23, 2018, from 5:00 PM until 7:00 PM at the funeral home.

The family of Mrs. Margie B. Bennett created this Life Tributes page to make it easy to share your memories.

Send flowers to the Bennett family.