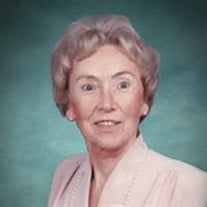 Lester Frances Ashmore Bohler Harriss Sheafe, 101, passed away Sunday, March 31, 2019 at Brandon Wilde, Evans, Georgia. Born in Lincoln County, Georgia, June 11, 1917, daughter of Richard and Maude Ashmore, Lester was adopted by her paternal aunt Mrs. Lorena Ashmore Bohler and Benjamin Mitchell Bohler after the death of her mother. She grew up in Grovetown, Ga. and has been a lifelong resident of Columbia County. She was preceded in death by her husband Winston Richmond Harriss, Sr. of 48 years and her husband by her second marriage, Charles M. Sheafe, III. Lester was a disciplined believer in exercise and walked several miles daily for many years. She also did aerobic exercises in the swimming pool as well as taking up ballroom dancing in her later years. She was a strong advocate of education encouraging her children and grands to pursue higher education. She was an avid bridge player who enjoyed playing with various groups. Working crossword puzzles also occupied some of her time. She was a marvelous cook and encouraged her family to eat vegetables. Lester graduated from Augusta Junior College and from Georgia State College for Women. She taught the third or fourth grade for 31 years in Columbia and Richmond Counties and retired from Columbia County Board of Education. She was a member of Alpha Delta Kappa Sorority, the Georgia Retired Teachers Association, and was a charter member of the Harlem Women's Club. Being a long-time member of Philadelphia United Methodist Church she leaves a legacy of a Harriss Sheafe Scholarship for a graduating high school senior of the church. She taught Sunday School at Philadelphia United Methodist for many years. When she passed away, she was the oldest living member of the church. Lester (Mother, Grandmother, and G.G.) had once said, "This is my sentiments well stated by Henry Van Dyke" … I shall grow old, but never lose life's zest, because the roads last turn will be the best! Left to cherish her memories are, two sons, Winston Richmond Harriss, Jr., (Hedda) of Henderson, NC, and John Mitchell Harriss (Roberta) of Harlem, GA; her daughter, Phyllis Harriss Miller of Decatur, GA; one granddaughter, Susan Harriss Collins (Joseph) of Clemmons, NC; four grandsons, David Harriss (Amy) of Harlem, GA, Brian Harriss (Merlin) of Harlem, GA , Olin Miller (Yanling) of Seattle, WA, and Lester Miller (Brigid) of Los Gatos, CA; 5 grandchildren and 12 great grandchildren. She treasured her friendship with Dr. Richard Fender, and her family are so thankful to Bessie Hutchinson as well as Brandon Wilde for their excellent care. If so desired, in lieu of flowers, the family is requesting memorials be made to Philadelphia United Methodist Church, 780 Old Louisville Road, Harlem, GA 30814. Funeral services will be held at 11:00 AM on Thursday, April 4, 2019 at Philadelphia United Methodist Church with the Reverend Charles Broome and the Reverend Paul Bradford officiating. Burial will follow in the Old Union Baptist Cemetery. The family will receive friends from 10:00 AM until time of service at the church. Pallbearers will be David Harriss, Brian Harriss, Joe Collins, Christopher Collins, Dave Gibbs and Jim Lewis.

The family of Mrs. Lester Harriss Sheafe created this Life Tributes page to make it easy to share your memories.

Send flowers to the Sheafe family.