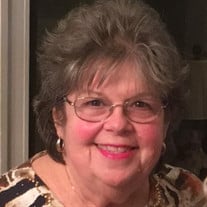 Graveside services for Kathleen Kurtz Cunningham, who passed away June 27, 2019, will be held at 11:00 AM on Tuesday, July 2, 2019, in the Harlem Memorial Cemetery with the Father Stephen J. Lyness officiating. Kathleen was a teacher to us all about life, loyalty, kindness and love. Her unconditional love and acceptance of others was exceptional, and she put it to work in her roles of mother, wife, nana, daughter, sister and educator. Kathleen was born in California on June 6, 1945 to George and Mickey Kurtz (both deceased), but raised in Bordentown, New Jersey with her four siblings: George Kurtz, Mary Kurtz (deceased), Peggy (John) Gontkof and Phillip (Jane) Kurtz. She taught school in New Jersey for three years before marrying Major BJ Cunningham in 1972 and moving to Pumpkin Center in Harlem, Ga. Here they began raising their three children: Leslie Cunningham (Emporia, KS), James Cunningham (deceased) and Ben (Starr) Cunningham (Armuchee, GA). During this time, she showed she could also learn and became a phenomenal southern cook. In 1978, she and BJ moved to the south edge of Harlem and together, they restored a 100-year-old Antebellum style home from the studs up! She had beautiful flower beds and enjoyed feeding and watching song birds. She and BJ were married for 44 years before he died in 2017. He was the love of her life. Kathleen was a teacher for Columbia County for 31 years, retiring in 2005. She was known for her organization of field trips, most notably to the Okefenokee Swamp, where she instilled a love of nature and the responsibilities of conservation. Mom was green before green was a thing! She is in the National Teacher Hall of Fame. Kathleen did not teach just so a student would learn, but so they would develop a love of learning. She also taught Sunday School and was a long-time member of the St. Teresa Catholic Church in Martinez. Later, she began attending Queen of Angels Catholic Church in Thomson, Ga donating her time, money and talent as a gardener by designing, planting and seeing to the upkeep of the church ground flower beds. Her quiet, steadfast faith was an example to all as she taught others the power of love and forgiveness. Her happiest role was that of Nana. Kathleen was blessed with three grandchildren: Matthew Grandon (Garland, TX.) Andrew Grandon (Garland, TX) and Addison Cunningham (Armuchee,Ga.) She loved sharing with them her love of nature, going fishing, planting flowers, and doing arts and crafts projects. She always had a listening ear, solid advice and unconditional love. She will be greatly missed by them. In Lieu of flowers, memorials may be made to Multiple Myeloma, Research Foundation P.O. Box 414238, Boston, MA 02241-4238 STARLING FUNERAL HOME, HARLEM, GEORGIA 706-556-6524

Graveside services for Kathleen Kurtz Cunningham, who passed away June 27, 2019, will be held at 11:00 AM on Tuesday, July 2, 2019, in the Harlem Memorial Cemetery with the Father Stephen J. Lyness officiating. Kathleen was a teacher to us... View Obituary & Service Information

The family of Kathleen " Kathy" Cunningham created this Life Tributes page to make it easy to share your memories.

Send flowers to the Cunningham family.