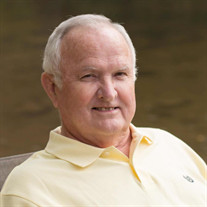 John Edward Neal began his life journey on December 23, 1950 and transitioned to Heaven on July 27, 2020. John lived his dash between those dates with a friendliness that meant he met no stranger, exhibiting unconditional love to family and friends and leaving imprints of goodness on the lives and hearts of all who were privileged to have their lives intersect with his life's journey. John became "Sugarman" to Rosemary and together they forged an example to others as their love was the basis for a marriage that endured some of life's toughest trials and greatest accomplishments. John enjoyed being "daddy" to three beautiful daughters, Toni Neal who preceded him in death, Haley (Daryl) Reid and Erin Neal. Through his career with Lance, John earned the name "Cookie Man," which many continued to call him well after his retirement. John was a faithful servant of God who used his talent for singing to minister to others. With an avid love for Southern Gospel music, John often introduced others to the messages of God's love, grace and mercy through songs written and sung by others. Due to his love for antiques and items no longer manufactured, after his retirement, John enjoyed checking out items at estate sales and that usually included some dickering with the seller to get the best price possible. He possessed the talent to wheel and deal in a way that left everyone wondering how he did it so well. Yet in all his dealings, John was honest and fair which resulted in others having a respect for him that was extraordinary. John valued family and enjoyed spending time with his siblings, Billy (Jewell) who preceded him in death, Bobby Neal (Sandra) and Elaine (Wayne) Higdon and his many nieces and nephews as well as aunts, uncles and cousins. He was also preceded in death by his parents, Freeman and Bernice Neal. Although John was the baby of the family, he was an anchor whose love served as the glue that encouraged everyone to stick together regardless of the circumstances. John was a friend to many and through his relationship with them made them feel as though they were more than friends but his family. He was a part of the McDonald Coffee Club even though he did not drink coffee because that was where his friends gathered. John was a member of Old Union Baptist Church where he served in numerous positions through the years. A Graveside Service of remembrance will be held on Friday, July 31, 2020 at 9:00 a.m. in the cemetery of Old Union Baptist Church with Rev. Allen Yarbrough officiating. The family will receive friends at the residence after the service. If so desired, memorials may be made toAttic Treasures, PO Box 147, Harlem, Georgia 30814. Serving as Pallbearers will be David Boiter, Dave Thompson, Ron Green, Jimmy Wilcher, Trey Mackey and Dwayne Higdon. Honorary Pallbearers will be members of the McDonald's Coffee Club. Due to the current COVID-19 regulations, our staff is committed to taking care of our guests and families that we serve. We ask all guests and family members attending the graveside service to practice social distancing and if medically able, wear a mask.

John Edward Neal began his life journey on December 23, 1950 and transitioned to Heaven on July 27, 2020. John lived his dash between those dates with a friendliness that meant he met no stranger, exhibiting unconditional love to family and... View Obituary & Service Information

The family of John Edward Neal created this Life Tributes page to make it easy to share your memories.

Send flowers to the Neal family.