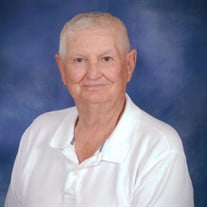 John Reginald Jones, 84, entered into rest on April 3, 2018. Mr. Jones proudly served his country in the Military from 1953 until 1974. He served in Korea, Germany and Vietnam. He received many medals and honors including the Combat Infantry Medal, Purple Heart, Bronze Star, Presidential Unit Citation and Vietnam Cross of Gallantry. After retirement from the Military, he worked for Winn Dixie, Tracy Luckey Pecan Company, Kroger and the Commissary at Fort Gordon. In his spare time, he enjoyed watching the Atlanta Braves, fishing and doing Word Search Puzzles. He was a member of Harlem Baptist Church where he was an original member of the JE Cook Class and served as an usher. Survivors include his second wife, Dianne Jones; two daughters, Pam Jones, and Donna Park (Jim); one son, Bill Jones; one grandson, Will Jones; one stepson, Will Patterson; two sisters, Betty Gillespie and Nancy Nelson; his two dogs, Smoky Joe and Cheyenne; and other relatives to cherish his memory. Funeral services will be at 11:00 AM on Saturday, April 7, 2018, at Harlem Baptist Church with the Reverend Carson Britt officiating. Interment will follow at Harlem Memorial Cemetery. Pallbearers will be members of the Military. Honorary pallbearers will be the JE Cook Sunday School Class. He was preceded in death by his first wife Lois Jeanette White Jones; his parents, Royal and Viola Jones; and his brother, Royal Jones, Jr. The family will receive friends on Friday, April 6, 2018 from 5:00 PM until 7:00 PM at the funeral home. If so desired, memorials may be made to the Harlem Baptist Church Building Fund, PO Box 790, Harlem, GA 30814.

John Reginald Jones, 84, entered into rest on April 3, 2018. Mr. Jones proudly served his country in the Military from 1953 until 1974. He served in Korea, Germany and Vietnam. He received many medals and honors including the Combat Infantry... View Obituary & Service Information

The family of Mr. John Reginald Jones created this Life Tributes page to make it easy to share your memories.

Send flowers to the Jones family.