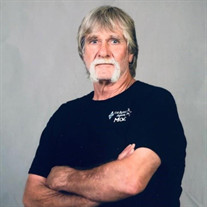 James William "Moe" Mrogik January 18, 1958 — May 2, 2022 James William "Moe" Mrogik, aka "The Hashmaster," 64, of Augusta, GA, passed away on Monday, May 2, 2022, after a long illness. His beloved sister Martha and her husband Bill, and Patty, the love of his life, were with him as he went home in the arms of Jesus. Moe was a 1976 graduate of Harlem High School, in Harlem, Georgia, before graduating from Abraham Baldwin Agricultural College in Tifton, Georgia, in 1979, with degrees in Forestry and Wildlife Management. He worked for Pollard Lumber Company before starting a career in trucking. He moved to California, where he met his future wife Patty. They moved to Oregon, and he worked for A&M Transport, before moving back to Georgia where he was employed by LandAir Transport. Once back in Georgia, Moe reconnected with his dearest friend, Homer Carpenter, who was like a second father to him, along with a special group of high school friends that were known as "the Homer Gang." This tight-knit group of friends would often meet together, gathering around the barbecue pit to share good times, good food and good memories. Homer passed on his secret recipes for his famous bbq sauce and hash to Moe, and the two worked together to provide it for the gatherings. Moe earned the nickname "Hashmaster" while working in the kitchen at Augusta First Baptist Church. One day the chef was making hash for an upcoming church dinner. Moe asked him, "What IS that?" The chef said that it was hash, and invited Moe to taste it. Moe did, and when the chef asked his opinion, Moe told him that it tasted terrible. The chef retorted that if Moe thought he could do better, then to prove it. So Moe cooked up a batch of hash, and upon tasting it, the chef told Moe, "From now on, when we need to make hash, you'll be the one cooking it. You are the Hashmaster!" And the title stuck with Moe from then on. Moe was a kind, loving person, with a quick smile and an impish sense of humor, and was loved by everyone who knew him. He truly "never met a stranger," and was open and friendly to everyone he met. He loved to make people smile and laugh. He will be deeply missed by all. Moe is survived by his sister and brother-in-law, Martha and Bill Perkins, nieces Brittney and Heather Perry; sister and brother-in-law Heide and Dean Martin; nephews Robert and Christopher Martin; and his soulmate, Patty Wachold. He was preceded in death by his parents, Captain James and Marilyn Mrogik. Moe was a fairly private person, so as per his request, there will be no visitation or services. He will be cremated and his ashes will be taken care of according to his wishes. In lieu of flowers, the family asks that donations please be made to The Hale Foundation, 402 Walker Street, Augusta, GA 30901.

The family of James W. Mrogik created this Life Tributes page to make it easy to share your memories.

Send flowers to the Mrogik family.