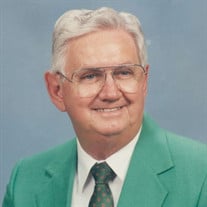 Rev. James Rudolph Dixon, Sr., passed away on May 27, 2018, his 93rd birthday. He was the son of James Oliver and Mary Emily (Maples) Dixon (Dickson) of Columbus, Georgia. He received his education from Jordan High School in Columbus, the University of Georgia and Emory School of Theology. After working for many years as a sales manager, God called him to the ministry. He was ordained as a United Methodist minister in 1958 and served as a dedicated pastor to churches in the North and South Georgia conferences. His first church as senior pastor was the Georgetown circuit where he was minister at five churches. He preached 9:00, 11:00, 3:00 and 7:00 services every Sunday. On the fifth Sunday of the month, he preached at the fifth church. In the Augusta area, he served at Cokesbury United Methodist, Harlem United Methodist, Dunn's Chapel United Methodist and Aldersgate United Methodist. In the South Georgia Conference he served in Georgetown, Claxton-Hagan, Brunswick and Hoschton-Braselton areas. He was a World War II veteran serving in the United States Army Air Corps stationed in the Pacific from 1943 to 1946 when he was honorably discharged. He served as a Top Machine Gunner on a Boeing B-29 Superfortress and was discharged with the rank of Sergeant. During his military career, he was the recipient of the Victory Medal, the American Service Medal, Good Conduct Medal and Asiatic Pacific Service Medal. He loved helping his community and was elected to the Harlem City Council where he served for 17 years. He was honored as Mayor Pro Tem, chaplain, and City Councilman Emeritus. While representing the City Of Harlem, the birthplace of Oliver Hardy, he was honored by the Ulverston Town Council in England, the birthplace of Stan Laurel. As a member of the Rotary Club of Harlem, he served as the secretary and received a Paul Harris Fellow. He was also a member of the Grand Lodge of Georgia (Richmond) and the American Legion. He was preceded in death by his wife of 69 years, Rosemary Ariail Dixon, and his sister and brother-in-law Johnnie and Francis Gibson; He is survived by his daughters, Linda Smith (Jody) of Covington, Pat Daniel (Hub) of Claxton, Kathy Anderson (Greg) and Dee Holmes, of Cartersville; his son, Jim Dixon (Terry), North Augusta; his surviving grandchildren are Laura Elliott Budnick (Brian), Ariail Gorman (Russell), Darci Tuten (Chris), Melissa Lu (Theo), Sam Daniel (Amy), Nick Anderson, Kate Dixon, Erin Conner (Aaron), Connor Dixon, Jake Dixon (Whitney), Meredith Holmes, Matthew Holmes and Josh Holmes. And eleven great-grandchildren. Visitation will be held at Aldersgate United Methodist Church, 3185 Wheeler Road, Augusta, Ga., from 12:00 PM until 2:00 PM on Monday, June 4, 2018, with Funeral services to follow at 2:00 PM at the church with the Rev. Coy Hinton officiating. Burial will follow at Harlem Memorial Cemetery, Harlem, Ga. Pallbearers will be Sam Daniel, Nick Anderson, Matthew Holmes, Josh Holmes, Jake Dixon, Brian Budnick, Russell Gorman, Chris Tuten ,Theo Lu and Aaron Conner. Honorary Pallbearers will be Harlem City Council Officials and Staff. Please visit www.starling-evans.com to sign guestbook. STARLING-EVANS FUNERAL HOME, 435 W MILLEDGEVILLE ROAD, HARLEM, GA. 706-556-6524

Rev. James Rudolph Dixon, Sr., passed away on May 27, 2018, his 93rd birthday. He was the son of James Oliver and Mary Emily (Maples) Dixon (Dickson) of Columbus, Georgia. He received his education from Jordan High School in Columbus, the... View Obituary & Service Information

The family of Rudolph Dixon Sr. created this Life Tributes page to make it easy to share your memories.

Send flowers to the Dixon family.