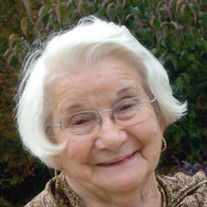 Jacquelyn Wood Adams, 81, Harlem, Georgia, affectionately known as “Darlin”, entered into rest on July 13, 2016 at Kentwood Extended Care Facility. Darlin was a loving wife, mother, grandmother, great grandmother and friend. Funeral services will be held at 11:00 AM in Harlem Baptist Church on Saturday July 16, 2016 with Rev. Carson Britt and Adam Nelson officiating. Burial will follow at Westover Memorial Park, Augusta, GA. Darlin was born in Augusta, Ga, lived in Martinez, Woodstock and Harlem. She was raised in Oak Grove Baptist Church in Augusta where her parents were founders. She was married to William in 1950 until his death in 1987. She retired from the Richmond County School System as a Lunch Room Manager. She loved cooking for her family, shopping for shoes and dishes, and traveling as she visited all 50 states, Canada, Mexico and England. Darlin was an avid reader, loving Christian and historical novels. She loved horse racing, especially the Kentucky Derby. She loved being pampered and especially when grown men called her Darlin. She called herself the matriarch of the family and therefore could rule over us. She was lovingly allowed to believe that. She had a great sense of humor and had no problem laughing at herself. You best not say food was “nasty” or wear a hat to her table. A proper set table was her talent which she insisted on at every meal. Her son's-in-law, Charles and Don, were like her own children. They not only treated her with love and respect, they continuously went above and beyond. Their love for her and her's for them was apparent to all that knew them. Darlin was a former member of National Hills Baptist where she coordinated Wednesday Night Suppers and with William coordinated Senior outings. She was a current member of Harlem Baptist Church, including the Fidelis Sunday School Class, and a former member of the Senior Choir and Wednesday Night Supper Teams. Darlin was preceded in death by her parents, Walter and Arlene Wood, her husband William Ernest Adams, her daughter Pam, brother Jerry Wood and sisters Miriam Lewis, Carolyn Morgan, Laverne Wilkins, son-in-law Charles Storey, granddaughter, Pam Storey and step-grandson Jeff Ray. Survivors include daughters Connie Storey, Joy (Don) Ray, sons William Ernest Adams and George Kenneth Adams, grandchildren Laura (Tim) West, Robyn (Mitchell) Harman, Brandy Storey, Sadie (Tony) Trobaugh, Adam (Katie) Nelson, Matthew Nelson (Chelsea Carlson) , Jaime Adams, step-grandchildren Carla (Doug) James and Donnie (Kim) Ray. Great grandchildren include Alexis West (Steven Bloedel) and Troy West, Cody, Noah and Sarah Harman and Brycen Trobaugh. Step-great grandchildren include Rusty (Laura Brown), Tyler (Ashlyn) James, Diana Ray and Rebecca Lynn Gill. She had one great-great grandchild Scarlet Bloedel. She had many loving extended family members including Evelyn Adams, Kenneth Morgan and family, sister-in-laws Julia, Mary, Rubilee, several nieces and nephews, Matthew Presley and her “other daughter” Saundra Plunkett. The family would like to thank the staff at Kentwood Extended Care Facility for their loving care. Their devotion and special care for both Darlin and her family went beyond expectations and was greatly appreciated. If so desired, memorials may be made to the Sue Whiddon Building Fund at Harlem Baptist Church, 105 West Milledgeville Rd., Harlem, GA. 30814 The family will receive friends at Harlem Baptist Church on Saturday, July 16, 2016 from 10:00 AM until service time.

The family of Mrs. Jacquelyn Wood Adams created this Life Tributes page to make it easy to share your memories.

Send flowers to the Adams family.