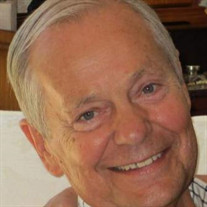 This week the Lord called home Hubert (Ron) Hartshorn, one of his special servants after a life lived with supporting others as the focus of his true purpose on Earth. Ron was born on Jan. 11th, 1941 in Richwood, WV. Ron was the son of the late Hubert and Juanita Hartshorn, and was preceded in death by a brother Daniel K. and his sister Catherine Blake. After his time in school, he started the first major chapter of his life in service to his country as a member of the US Army, and enlisting in 1959. It was during his Army career that he met and married his partner for life, Lynn, in 1963. After a full commitment of 20 years, Ron completed his college education at Augusta College and then transitioned to a career as a civil servant at Ft. Gordon, Ga. His main mission was to prepare other soldiers for safe and successful roles as communicators for the Armed Services. Toward the end of his civil service career, Ron was able to embrace and help plan a new mission…getting young people excited about Science, and Technology, Engineering and Math through programs and exhibits at the National Science Center's Fort Discovery. After his retirement as a civil servant in 1998, Ron came back for a few more years to work on the Science Center mission as a private citizens. During the last chapter of his life, Ron and Lynn got involved with service through Quest Church. Ron's love of the people of Belize led him to spend as much time as possible in the mission field there. Ron was a gifted artisan. He worked with recycled wood to make crosses and artwork to help enhance worship. He also took joy in sharing his birdhouses, crafts and angels with the many people he touched. The Lord called home his faithful servant, Ron, but his works and memory will live on in the hearts and minds of his many friends and family members still laboring on this earth. In addition to his wife, Lynn, survivors include his son, Ronald and his wife Jennifer; brothers Fred, Daniel, and Ken Hill; Keith and Mary Davies; the Donnelly family; and numerous nieces and nephews. He also leaves behind beloved friends in Augusta and across the Globe. Ron's family sends a special thanks to Paul Smith from Heartland Hospice for his caring and kindness during Ron's final days. A Celebration of Life will be held for Ron at Quest United Methodist Church, 5001 Gateway Blvd, Grovetown, GA 30813, Saturday, February 24, 2018, at 11:00 Am. The family will receive friends from 10:00 AM until 11:00 AM at the church. Any memorials for Ron should be sent to Quest Church, "Next Generation" or "A Better Belize" PO Box 453, Grovetown, GA 30813.

This week the Lord called home Hubert (Ron) Hartshorn, one of his special servants after a life lived with supporting others as the focus of his true purpose on Earth. Ron was born on Jan. 11th, 1941 in Richwood, WV. Ron was the son of the... View Obituary & Service Information

The family of Mr. Hubert "Ron" Hartshorn created this Life Tributes page to make it easy to share your memories.

This week the Lord called home Hubert (Ron) Hartshorn, one of...

Send flowers to the Hartshorn family.