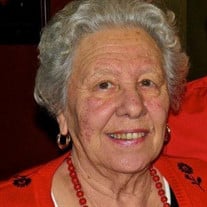 Mrs. Hildegard Martinez Grovetown, Ga. – Mrs. Hildegard “Hilda” Műller Martinez, passed away peacefully on Monday, July 25, 2016, at DDEAMC at the age of 80 from complications related to breast cancer. Hilda was born to parents Arthur and Anna Műller on July 17, 1936 in Hanau Am Main, Germany, near Frankfurt. She was the second eldest of five children. In 1960 she married Richard Martinez who was stationed in Karlsruhe, Germany. After they were married, the couple got stationed in Puerto Rico and had two sons. After a 20 year Army career, Richard retired from active duty in 1974 at Fort Gordon, Ga. They settled in Grovetown, Ga. and had a successful upholstery Business for over 40 years. Hilda was a devoted wife, loving and caring mother and grandmother. She enjoyed entertaining family and friends and never met a stranger. Always quick to smile and laugh, but was stern when she needed to be. Hilda is survived by her husband of 56 years, Richard Martinez; her two sons, Arthur Martinez (Michele) and David Martinez (Kim); her sisters, Gertrude Gonzales (Carlos) and Christel Bernhardt; four grandchildren, Whitney Martinez Lane (Brad), Jessica Martinez, Aaron Martinez and Andrew Martinez. She was preceded in death by her parents, Arthur and Anna and brothers, Hines Műller and Friedel Műller. Memorial services will be held at 3:00 PM on Sunday, July 31, 2016, at Starling-Evans Funeral Home with the Rev. Polly Davis officiating. The family will receive friends from 2:00 PM until time of service at the funeral home. If so desired, memorials may be made to the American Cancer Society, 2607 Commons Blvd, Augusta, GA 30909. Please visit www.starling-evans.com to sign online guestbook. STARLING-EVANS FUNERAL HOME, 435 W. MILLEDGEVILLE RD. HARLEM, GA. 30814. 706-556-6524

The family of Mrs. Hildegard M. Martinez created this Life Tributes page to make it easy to share your memories.

Send flowers to the Martinez family.