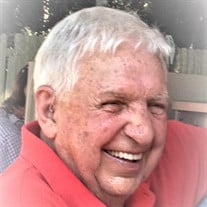 Henry Watson Matthews, Sr., 90, entered into rest on April 25, 2021, at University Hospital of Augusta. Mr. Matthews was born in Saluda, SC, to the late George and Ariel Matthews. A man of sterling character, Henry was a United States Army Veteran of the Korean War. He retired from DuPont with over 39 years of service. His many passions included his beloved University of Georgia Bulldogs and tailgating before Georgia games. He also enjoyed, hunting, fishing, camping – basically anything which involved being outdoors. Henry made many friends on his countless road trips taken in his “Hairy Dawg” camper, and then these new friends became life-long friends due to Henry’s genial nature, infectious personality, and zest for life. Nearly all his friends, new and old, were family to Henry, particularly his Kamper Klub community whose members were family to Henry. He was a member of Harlem United Methodist Church. Through his church, Henry made many mission trips to Nicaragua, and he could always be counted on to maintain the church grounds. He loved his church! Survivors include his dearest friend and partner in life, love, and adventure Joan Smith: one son Henry W. Matthews, Jr., and Henry, Jr.’s mother Effie R. Matthews; his grandchildren Henry Matthews III (Morgan), Aaron Vernon Matthews, Lindsey Matthews and Loren Matthews; great-grandchildren Riley and Mattie; and, two nieces Patricia Ann Holder and Gloria Maria Holder. A time of Visitation will be held on Wednesday, April 28, 2021, from 11:00 AM until time of Funeral services at 12:00 noon at Harlem United Methodist Church with the Reverend David Cooper officiating. Burial with full Military Honors accorded will follow at 3:00 PM in the Good Hope Church Cemetery, Ward, South Carolina. Pallbearers will be Henry Matthews III, Aaron Matthews, David Allen, Don Cooper, Steve Johnson, Tyler French, Floyd Simons, and William Hemley. Honorary Pallbearers will be Bob Samples, Ken Brooks, Bo Lawrence, Arlon Jahnke, Mike Wilson, and Tony McTier. If so desired, memorials may be made to the Harlem United Methodist Church.

The family of Henry W. Matthews Sr. created this Life Tributes page to make it easy to share your memories.

Send flowers to the Matthews family.