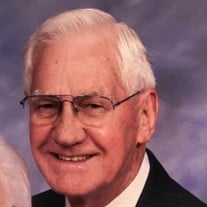 Gatha Alton Owens (May 13, 1926-January 7, 2021) Gatha Owens entered into rest with the Lord on 1/7/2021. He was born in Samson, Alabama on May 13, 1926, the 11th of 12 children of John W. and Louvenie Iola Owens. Mr. Owens was preceded by his beloved wife of 70 years, Elaine Buxton Owens, who was also from Samson. He is survived by his son, Gatha Buxton Owens and daughter-in-law Beverly Patrick Owens of Homestead, Florida; daughter, Margaret Delaine Owens Wilkes and son-in-law Dr. Gary L. Wilkes of Harlem, Georgia; six grandchildren, Wendy M. Dixon (Sean), Scott W. Wilkes (Sue), Candy N. Cole (Ian), Tara W. Cooper (Terry), Chad G. Wilkes (Melissa), and Dr. Gail Patrick Marcella (Jeff); thirteen great-grandchildren, and two great-great granddaughters. Mr. Owens was drafted into the Army Air Corps in 1944 and served as a B24 Nose Gunner. Upon returning from the Pacific Theater, he finished high school and entered college at Troy State (now Troy University) and graduated in 1949 with a Bachelor’s Degree in Education, which he used to begin teaching in Samson. He was recalled by the Army in 1950 due to the Korean Conflict. Upon returning from overseas, he moved his wife and two children to Montgomery, Alabama to begin his appointment with the Alabama National Guard, where he served for 16 years and retired with the rank of Captain. He was awarded the Alabama National Guard Certificate of Achievement for Outstanding Service and Devotion to Duty. Mr. Owens then became an agent with Liberty National Life Insurance Company for six years. He moved to Dothan, Alabama in 1960 to begin employment with Allstate Insurance Company, where he worked for 30 years. During this time, he received many awards in excellence, including those that took him and his wife to national and international locations. Upon retirement in 1989, he moved to Panama City, Florida and resided there until 2005 when he moved to Harlem to live with his daughter on Stonewall Farm. In addition to his family, of central importance in his life was his service to his church and civic organizations. He and his beloved wife were baptized together in the First Baptist Church of Samson and again at Ridgecrest Baptist in Montgomery. He served in six Baptist Churches: First Baptist of Samson; Ridgecrest Baptist of Montgomery; First Baptist of Dothan; First Baptist of Lynn Haven, Florida; Sweetwater Baptist of Thomson, Georgia; and Harlem Baptist Church. He was active as a deacon, teacher, and program director while serving on many different committees. He was president of the Civitan Club of Dothan; raised to Master Mason at Samson Lodge 624; demitted to Dothan Lodge 466; moved to Pythagoras Lodge 358 at Panama City, and moved to Harlem Lodge 276 where he was recognized for 70 years of service in 2020. He was a York Right Mason raised to Sir Knight in Commandery #25 in 1981 in Dothan and was accepted as a Shriner by Alcazar Temple at Montgomery in 1981. He enjoyed fishing and hunting, especially with his son, grandchildren, and great-grandchildren. He loved his family and will be sorely missed by those who knew him. Graveside services will be held 11 AM, Tuesday, January 12, 2021 in the family cemetery at Stonewall Farm in Harlem with Rev. Carson Britt and Rev. Scott Wilkes officiating. In lieu of flowers, the family suggests donations to the Harlem Baptist Church Building Fund, 105 W. Milledgeville Road, Harlem, GA 30814.

The family of Gatha Owens created this Life Tributes page to make it easy to share your memories.

Send flowers to the Owens family.