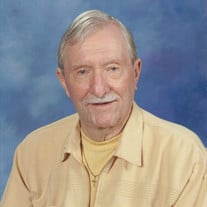 Harlem, GA - US Navy (Ret.) AZC Eugene Edward "Gene" Moore, Sr., 84, husband of the late Marianne H. Moore, entered into rest on Wednesday, December 20, 2017. A Celebration Graveside will be held at 11:00 AM on Saturday, December 23, 2017, in the Harlem Memorial Cemetery with the Father Mark Alstine officiating with Military Honors accorded. Mr. Moore was born in Harlem, Ga. to the late Forest and Allene Moore. He was a a retired Chief Aviation Maintenance Administration from the US Navy, having served in Vietnam. With 20 years of service, he retired from Columbia County Tax Assessors Office. He was a member of the American Legion Post #205 and the Fleet Reservist Association. Survivors include his son, Eugene E. Moore, Jr.; his step-children, John D. Casteel (Edie), Claud E. Casteel, Richard W. Casteel, Petra E. Lockwood, Barbara A. Beasley, Janet L. Casteel, Donna Davis, Susan Saveakonis and Doreen Gay. If so desired, memorials may be made to the American Cancer Society, 2607 Commons Blvd., Augusta, GA 30909. The family will have a private prayer service at 4:30 PM on Friday followed by receiving friends from 5:30 PM until 7:00 PM at the funeral home.

The family of Eugene Edward Moore Sr. created this Life Tributes page to make it easy to share your memories.

Send flowers to the Moore family.