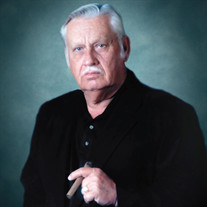 Grovetown, Ga. - Eual “Dean” Lynn, 88, entered into rest on April 2, 2016 at Thomson Health and Rehabilitation, after a long battle with Alzheimer’s Disease. Mr. Lynn, son of the late Sam and Jeffie Adams Lynn, of Phoenix City, AL, was a retired Signal Corps Master Sargent E-8 of 26 years. He served in two wars; Korean War and Vietnam. He received numerous awards and medals for his service. In 2003, he was awarded the medal, FREEDOM IS NOT FREE by Major General (Retired) Chui Seung Woo, ROC Army. After retirement from the Army, he served two terms as Mayor of Grovetown, 1978-1979 and 1980 -1981. He was a long term member of the Grovetown Lion’s Club, Veteran of Foreign Wars Lifetime member and a member at American Legion Post’s 63 and 192. He enjoyed fishing, being outside working in his yard, volunteering and helping others in his community. He is preceded in death by his wife Rita Lynn who passed away in 2003; a son, Mark Lynn; brother, Wayne Lynn and two sisters, Wilma Kane and Ruth Gillespie. Survivors include oldest son Jeff (Lynne) and youngest son, David. He had four grandchildren; Nicholas (Crystal), Michael (Mary), Jessica (Gary) Marean and Samantha Lynn. He also had three great-grandchildren Emily, Truitt and Remington. The family will receive friends on Friday, April 15, 2016 from 10:00 AM until 11:00 AM in the Chapel of Bellevue Memorial Gardens. Funeral services with Full Military Honors will be held on Friday, April 15, 2016 at 11:00 AM in the Chapel of Bellevue Memorial Gardens, Grovetown, Ga. with the Rev. George James, III. officiating. Pallbearers will be Members of the US Army Honor Guard. In memory of Dean, memorial donations may be made to the Alzheimer's Association, 1899 Central Avenue, Augusta, GA 30904.

The family of Mr. Eual Dean Lynn created this Life Tributes page to make it easy to share your memories.

Send flowers to the Lynn family.