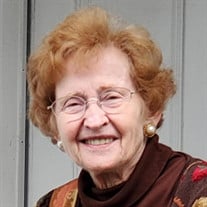 In Memory of Emily Gillham Middleton May 30, 1935 - April 22, 2021- Mrs. Emily Helen Gillham Middleton of Harlem, Georgia, passed to the next life on Thursday, April 22nd, 2021 as her seven month challenge with cancer came to an end. She was... View Obituary & Service Information

The family of Emily G. Middleton created this Life Tributes page to make it easy to share your memories.

Send flowers to the Middleton family.