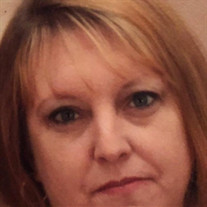 Deborah “Debbie” Ann Stanley entered into rest on August 1, 2018. Her journey here on earth began on December 15, 1966 in Augusta, Ga to her late parents Rev. Horace Leon Norris and Anna Mae “Polly” Norris. Debbie had a happy childhood and attended Thomson High School, class of 1983. Debbie’s greatest accomplishment was being the mother to her daughter Stephanie Ann Higdon. Stephanie was not only her daughter and most prized possession but also her best friend. She was the kind of mother that welcomed her home to all of her daughter’s friends and treated them at her own as well. Later in life in 1996, Debbie met Steven “Todd” Stanley whom was the love of her life that she later married. Debbie resided in Dearing, Georgia where she built most of her life and settled. She was a simple woman, it didn’t take much to make her happy. She loved more than anything her family, friends, and fur babies TJ and Ashes. A good ol Coca Cola and a Reese’s cup curled up on the couch in front of the Andy Griffith show was enough to put a smile on her face. She enjoyed cooking, classic rock and she read the Bible everyday. Most importantly, she loved people and she never met a stranger. There was never a dull moment in her presence and she really enjoyed just having a good time. Survivors include Husband, Todd Stanley, Daughter, Stephanie Higdon, Sister, Theresa Parsons, her Bubba George Norris, TJ, cat Ashes, and the following who, though they didn’t share blood, they were family to Debbie. “Sister” Pam Hadden Johnson, “Daughter” Heather Crawford and “Grandchildren” Lilie Rose Jeannine Ansley, Thomas Isaiah Ansley, Khristin Nicole Ansley, Haley Jean Crawford, Ashlynn Hannah Crawford, and Hunter Nathaniel Sikes who was known by his given name from Debbie “Butterbean” Services will be held on Saturday August 11, 2018 at 4pm at Dearing Full Gospel Church located at 5156 Adams Chapel Rd. Dearing, Georgia 30808. Flowers are welcome as she loved flowers, especially purple ones. But in lieu of flowers, donations made be made.

The family of Deborah Ann "Debbie" Stanley created this Life Tributes page to make it easy to share your memories.

Send flowers to the Stanley family.