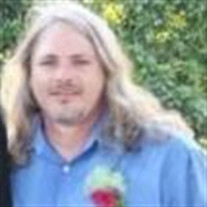 Harlem, Ga. – Clifford Allen Hintz, 47, husband of Barbara Hintz, entered into rest on Thursday, October 13, 2016. Funeral services will be held at 4:00 PM on Tuesday, October 18, 2016, at Powell Baptist Church with the Dr. Randall Whitaker officiating. Interment will follow in Bellevue Memorial Gardens. Mr. Hintz, a native of Harlem, Ga., was a service technician with Plunkett Heating and Air with over 23 years of service. He was a 1987 graduate of Harlem High School. He played in a number of bands, the latest being “Dirt Road”. He had the voice of an Angel. Clifford enjoyed sports and loved coaching football and baseball for his sons. He also loved his Georgia Bulldogs. He was a great husband, father, and son and took care of his mom. His motto was “Can’t never could do nothing” and was the type of man that would ask, knowledge was everything. Survivors include his wife, Barbara Smith Hintz; four sons, Alex Hintz, Aaron Hintz, Jeremy Harvey and Drew Moore (Shay); his mother, Vernice Meadows Hintz; grandmother, Dimple Meadows; mother-in-law Ruth Smith; two brothers, Michael Hintz (Lisa) and Jerry Hintz (Season); one sister, Patricia Hobbs (Paul); seven grandchildren, Katie Dyer, Caleb Harvey, Jordan Harvey, Shaylyn Moore, Brynlyn Moore, Allie Parker Harvey and Lincoln Moore; and a host of other family members; his best four-legged friend, Ryder. He was preceded in death by his grandfather, Julius Wesley Meadows. The family will receive friends on Monday, October 17, 2016, from 6:00 PM until 8:00 PM at the funeral home.

The family of Mr. Clifford A. Hintz created this Life Tributes page to make it easy to share your memories.

Send flowers to the Hintz family.