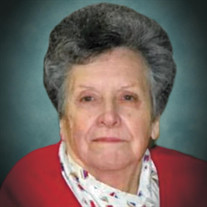 Catherine Rabun Neal, 86, wife of the late Richard L. Neal, Sr., entered into rest on November 4, 2017, at her residence. Funeral services will be held at 2:00 PM on Wednesday, November 8, 2017, at Starling-Evans Funeral Home with the Reverend... View Obituary & Service Information

The family of Catherine R. Neal created this Life Tributes page to make it easy to share your memories.

Send flowers to the Neal family.