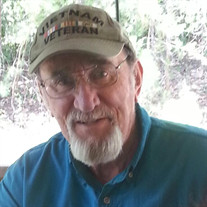 Harlem, GA – Maj. Bobby Jim “BJ” Cunningham Ret., 77, loving husband 44 years of Mrs. Kathleen “Kathy” Cunningham, entered into rest on Friday, March 10, 2017 at his residence. Additional survivors include a son, Ben Cunningham (Starr); a daughter, Leslie Cunningham; three sisters, Ann Rutledge (Buddy), Mae Babb (Don) and Delores Thaxton (Rick); three grandchildren, Addison, Matthew and Andrew. Mr. Cunningham was preceded in death by a son, James Cunningham; three brothers, Jack Cunningham (Fran), James “Cotton” Cunningham (Carmen) and Fred Cunningham (Jackie). Maj. BJ Cunningham was born in Harlan, Kentucky to Fred and Christine McGough Cunningham. He moved at a young age to Carbon Hill, Alabama where he graduated from Carbon Hill High School and joined the US Army in 1958.In 1967 BJ received a Commission from the Officer Candidate School, Class 23-67 Fort Gordon, Georgia. BJ graduated from the University of Tampa in 1972. He retired in 1979 after 24 years of active duty with tours in Korea, Vietnam, Germany and Fort Gordon, Georgia. He was recipient of numerous awards and medals for his service to our country. Shortly thereafter he worked in Civil Service 1980-1993 at Fort Gordon in the Signal Leadership Department. Maj. Cunningham was a soldier who lived a life of service to others and his country. His dedication to his family, his community and country was foremost. He was a Master Mason of Harlem Masonic Lodge 276 and served as Past Master three times; he served on the Columbia County and the Harlem Planning and Zoning Boards. BJ also served on the Board of Directors of the Bank of Columbia County; past member of the B&B Hunting Club and the Doddle Hill Hunting Club; he was an original member of the Harlem “Jet”setters. BJ was a man for all seasons. His positive outlook on life was a gift to all who knew him. His love of music, playing his guitar and singing, was a passion that he enjoyed sharing. It brought comfort, joy and good times to many. BJ was an outdoors man, whether it was hunting, fishing or gardening, so he could give away his bounty. He also greatly enjoyed watching clouds and beautiful sunsets. His life was complete and full surrounded by his family, the love of many nieces and nephews and numerous friends near and far. Graveside services will be held at 11:00 AM on Thursday, March 16, 2017, at Harlem Memorial Cemetery with Masonic Rites and Full Military Honors accorded. If so desired, memorials gifts may be directed to The Georgia Masonic Children Home, 117 Nottingham Dr. Macon, GA 31211, or to a charity of your choice. The family will receive friends at the funeral home on Wednesday, March 15, 2017 from 6:00 PM until 8:00 PM.

The family of Maj. Bobby Jim "BJ" Cunningham Ret. created this Life Tributes page to make it easy to share your memories.

Send flowers to the Cunningham family.