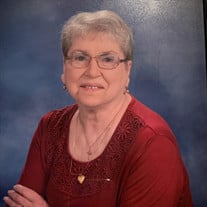 Bernice "Bunny" Clark Kuentzel, age 80, entered the kingdom of our Lord on Friday, August 27, 2021. She was born on the Eastern Shore of Maryland, in the waterside community of Crisfield, on July 4, 1941, to her late parents Clark Herbert Doane and Idella Conwell Massey. She eventually moved to the Western Shore of Maryland taking up residence in Glen Burnie, Maryland, where she met and married her late husband Edward "Eddie" Bradley Kuentzel Sr. They had two children, their daughter Miley Ann Taylor and their son Edward Bradley "Chip" Kuentzel Jr. She was a homemaker who cared for her family in Severn, MD. Later in life, she was an avid bowler, and was considered an anchor person for her team, that went on to win many local and national championships. She moved to Appling, Georgia, in 2006 and became an active member of Damascus Baptist Church. Here she flourished assisting with Wednesday night meals, participating in the widows group known as the GEMs, and became an active weekly volunteer at the Columbia County Cares food pantry. She also was an enthusiastic Canasta card player with a local group of retired women and widows. A dog lover, she cared for over six different breeds in her lifetime. Ms. Bunny is survived by her daughter, Miley Taylor (Gary); her son, Chip Kuentzel (Connie); six grandchildren, Chelsea Taylor (Craig), Zachary Taylor, Edward Bradley Kuentzel III (Cait), Samantha Prater (Bobby), Chase Kuentzel and Andrew Kuentzel; four great- grandchildren, Caden, Ayva, Clark, and Elisha; her sister, Barbara Bull (Herbert); her brothers, Edwin Renshaw (Minnie) and Daniel Doane; and a number of nieces and nephews. A visitation and memorial service will be held at Damascus Baptist Church, 6375 Ridge Rd. Appling, GA on Thursday, September 2, 2021. The visitation with the family will be 6:00-6:30 pm. with the service beginning promptly at 6:30pm. Ms. Bunny will be interred with her beloved husband Eddie at the Maryland Veterans Cemetery in Crownsville, Maryland at a later date. In lieu of flowers, donations can be made in her name to Columbia County Cares, 1959 Appling-Harlem Rd, Appling, GA 30802 or https://columbiacountycares.org.

Bernice "Bunny" Clark Kuentzel, age 80, entered the kingdom of our Lord on Friday, August 27, 2021. She was born on the Eastern Shore of Maryland, in the waterside community of Crisfield, on July 4, 1941, to her late parents Clark Herbert... View Obituary & Service Information

The family of Bernice Kuentzel created this Life Tributes page to make it easy to share your memories.

Send flowers to the Kuentzel family.